The official machine for the World Barista Championship 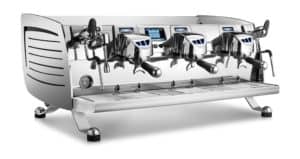 The Black Eagle Espresso Machine created quite a buzz at the World Barista Championship where it was the official machine for the competition.

And it was not the focus because of some complicated technology, in fact, the World Barista Champion Gwilym Davies described it as being hard to describe since it is very simple.

One of its outstanding features is the one that allows a user to pre-set 6 weights and there is a digital display that will show you each of their volumes and weights so that you know what to expect. TheThe Black Eagle Espresso Machine may make the process of brewing coffee much easier but it still allows the barista to determine exactly how they would want the espresso to taste by setting their own volume of coffee for a particular cup.

The drip function will adjust to the type of coffee being used since some coffee may retain more water and cause less drips. This feature enables you to have just the right amount of drips.

It is also possible to program the temperature which will determine the taste of the coffee. In essence, the Black Eagle Espresso Machine gives a barista the freedom to give the machine their preferred recipe for the perfect cup of coffee, by programming all that information and then letting the technology do the rest. It is still possible to brag that you made the perfect cup of coffee since the machine simply takes the orders from you when you set it.

A number of experts have praised the Black Eagle Espresso machine as being the barista’s best friend.